Skip to Content
Home Blog Fight for My Way: A Relatable KDrama for Struggling Millennials

milkhomeandhoney 6 Comments on Fight for My Way: A Relatable KDrama for Struggling Millennials

One of my favourite KDramas that spoke to my experiences as a struggling millennial was Fight for My Way. The most popular KDramas in the Philippines have mostly been focused on fantasy and glamour content. But while these were highly praised, I was always looking for something more relatable. Something where I could see myself in the characters. At the time of its showing, I was in my late twenties still finishing up my undergrad degree. Compared to most of my peers, I was at the bottom of an imaginary ladder.  It was during that short stretch between school and unemployment that I found myself indulging in more than my usual three asian dramas at a time.

There are in fact a number of slice of life and coming of age KDramas (Misaeng, Radiant Office- to name a few.) Some are underrated while some have enjoyed higher ratings and popularity. One of these KDramas was Fight  for My Way.

FIGHT FOR MY WAY

It’s about a group of friends in their late twenties who are struggling to achieve their dreams in a society that’s obsessed with the traditional definition of success. For the most part, it’s about the late bloomers, the kids who didn’t get to follow a straight path because of life’s curveballs. Of course, like any well-rounded KDrama, there is romance. A relationship between two longtime friends in a dance of will they, won’t they. While the other couple works through their long-term relationship and the struggles that come with it.

“The major leagues is where you are.” – Ko Dong man

This is what Ko Dong Man told Ae ra when she was having a dilemma about which job interview to go to on the same day. Ae ra was reluctant to let go of the announcer job interview because everyone wanted to be a news announcer. But Dongman knew her so well that he knew she would be happier to work as an MMA court announcer. This straightforward line basically says: It doesn’t matter what the majority thinks is the best job, what you want to do, that’s the best job for you. That’s your major league. 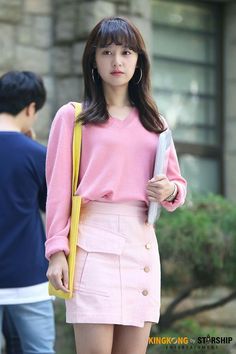 Ae ra was  rudely asked by an interviewer what she had been doing with her life (her contemporaries had internships and experiences abroad while she had no related experience in the announcer field.) She answered that she was earning money.  Later on Ae ra sat on the bus and was so frustrated that a mere resume would be the basis for judging her life experiences.

Like Ae ra, I worked a lot. I worked different jobs, some related to my field but most were serving burgers or looking for petite sizes at the back of a storage room. I did all these so I could earn enough to continue my film education. Like Ae ra, these experiences actually taught us most about life and how to be a decent human being. It may not look good on a professional resume but it was real life. We didn’t have the luxury that others did. In school, I do feel like my classmates don’t trust me enough to work in productions because they don’t see any related experience. I even had someone condescendingly remark about how their experience were superior to mine. However, Ae ra was still good with the microphone, she knew how to adapt and how to get along with people. That classmate didn’t realize that I too brought a different skill set into the picture. And from what I learned through all these years of working, I know that you can always learn something, having a good attitude is more important. I try to remember this whenever classmates underestimate me just because they haven’t seen me working in the context of a film production. I mean tbh, they need to learn more professionalism, they’re always running late. sigh.

become my patron of the arts

The ordinary arts we practice every day at home are of more importance to the soul than their simplicity might suggest.― Thomas Moore

Share this ArticleLike this article? Email it to a friend!
Email sent!